Choppy and frustrating swim. Swallowed lots of nasty ocean water. Felt strong during the bike and had the best female bike split. Was in the lead early on the run, but from km 10 my stomach problems began, which put a end to my goals and expectations, and the race ended in the medical tent and a 9th place.

The race preps had been flawless, and I felt stronger than ever on the bike and run. It  had also been confirmed at Challenge Fuerteventura 4 weeks prior IM Brasil, when I noted a PB in avg power on the bike and also a pace PB on the run, only 4 weeks after IM Melbourne.

I traveled alone and on race site six days prior the race, which was enough time to check out the course and surroundings. The bike course was on a highway, and we could not ride it before race day. German Mareen Hufe and I made an attempt, but quickly changed our minds as we felt that life was worth living. This despite having her very sweet dad in a car behind us. Thanks Gunther for the back-up all week!

We started on the beach, and we swam in a backwards M, where we ran 70 m on the beach halfway. You could not see your hand in front of you, and sometimes my hand touched something,I did not want to know what it was, so the water quality was maybe a bit questionable. I got a bad start, squeezed in between two other girls, and swallowed a lot of sea water.
I swam the rest more or less without contact with others. It was much more choppy than it looked from the beach and I had trouble finding a good rhythm. 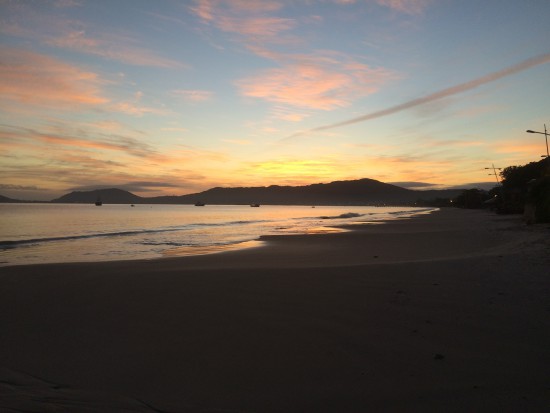 Despite the bad start with a slow and hard swimming, I had great legs from the start of the bike, and I quickly found a good rhythm.
Therefore I tried not to focus so much on my watts, but rather on the feeling. We rode out and back on a two looped course, and I saw that I gaining on all my competitors.

The second lap was much challenging than the first, the wind had started to pick up, and the rhythm was a bit destroyed when a few large groups of AG-men overtook us forced us pro ladies to sit up and dropping back.

About 15 km before T2, I had caught the first group where Tine Deckers and Amanda Stevens were. Less than 2 minutes ahead was the speedy swimmer Haley Chura. 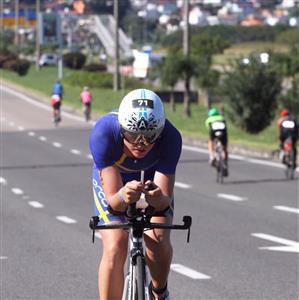 Me and Tine Deckers exited  T2 together, and less than a kilometer later we had pasted Haley. At about 5 km I was in the lead, and I felt strong and controlled.

Unfortunately, that did not last very long. Already at km 8 my stomach began troubble me, with cramps and I stared feeling nauseous. From there it went downhill. At km 15 I was forced to stop for the first time, and it was far from the last. I couldn’t keep any nutrition, it bounced back both ways, and I had horrible stomach cramps.

Wacky as the head easily gets under pressure and with a low energy levels, I started drinking a lot of water as I got very thirsty after having emptied the stomach and intestines. In other words,I got no salt in that could bind the water I drank. And thus my symptoms only got worse. Thank you Frank for reminding me of salt late the course, not sure could have finished without the salt tablet I got with about 8 km to go.

One by one, the other girls passed me, and before I crossed the finish line I had dropped down to 9th place, with a marathon way under my capacity and expectations. But I finished, and it was a personal victory.

Once on the other side of the finish line I collapsed in someone’s arms, and I was taken to the medical tent. There I got IV treatment for my symptoms, and after a couple of hours, I was back on the pitch. Such wonderful people helping me, I am forever thankful!

What caused my stomach problems have been analyzed, but one can not know for sure. Maybe it was all seawater as I accidentally swallowed during the swim. Maybe it was the fact that they only served bananas and Gatorade in the form of energy during the biking and running (and cake on the run) and that they were not given access to special needs. Gatorade and I have never been successful partners.

I was hoping for a top-5 to secure a spot for first qualifying to IM Kona, but now the situation looks a bit different.
This dynamic of racing at this distance, and at this level, is part of the beauty of this sport, and not being able to take any success for granted makes it so much sweeter once you get success.
After 12 long distance races without any problems with nutrition, perhaps it was my turn, on my 13th race. But now it’s done!

More on what is happening in front in a future post.