I’ve been wanting to write a post for a long time, but not really felt that there was something to write about.

Okay, maybe it was motivated to write about the Ironman in South Africa, where I finished 4th in the Ironman African Championships, and made my most solid and controlled Ironman ever. Buuuut, after the race, I held a two-week vacation in the great country of South Africa with my husband-to-be, and when I came home it felt like the moment had passed and it was too late.

For the curious race reports lovers, the race can be summed up with a controlled swimming where I had more energy when exiting the water than ever before, despite quite choppy and wavy conditions, which is usually not in my favor.  If I can get to a better start, I’ll should soon be able to swim with a faster group.
In T1 my bike bag was lost, and it took me a stressful few minutes before a volunteer found it in the changing tent. Thus lost my swim group. On the bike leg, I dared to be more patient than ever, which meant I did get any crises, I rode progressively all the time and felt very comfortable when starting the run. It was also mainly about having patience, and I ran my second fastest marathon in 3:08h in about 35 degree C heat (low humidity). However, there were three other girls whom also had a solid, but a bit faster, run so I had to settle for a 4th place. Hate falling short off the podium, but there was margin enough to get Kona qualification points.

Back to not having anything to write about. Because I didn’t think I did. Everything just continued in a solid pace. But just that is actually worth writing about, for that is exactly what is one of the cornerstones to development and success, if you ask me. It’s one of the things that I like to emphasize when I give lectures for companies, club or other groups. Consistency. Without that, the body will never given a chance to seize the stress (training) you subjected it to, strengthen from it and continuously build form on. I usually say that it is when you almost given up the eager to reach certain milestones, that you start to progress. You work hard and you drudge, but you do not seem to see any change. If you instead find a routine in the training, based on the fact that you like it and it makes you feel good, that’s when the body is given the time – the consistency – it needs to raise your fitness level one notch.

That is exactly what I have done since coming back home to Jönköping, Sweden, from South Africa. Training 2-4 sessions a day, two days a week with only swim, gym and massage, swimming with the local swim club and just getting the work done. 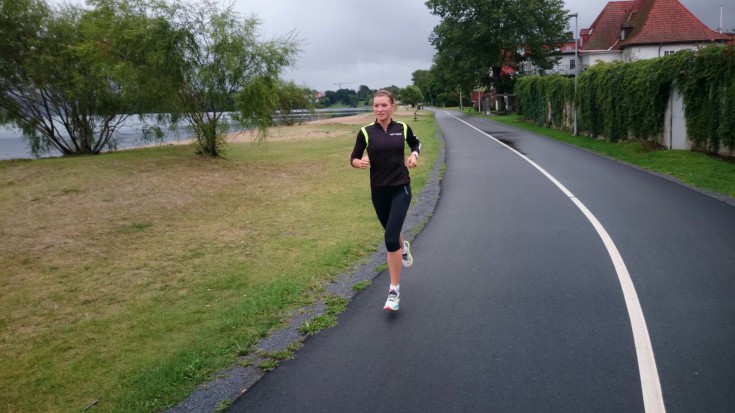 I hardly expected myself to be completely recovered from IM South Africa. But then I had the idea to run a local 5k race about one week ago, along with 5000 other women.  I was the 4th session of the day, and was substituted by running solo intervals along the lake. I did’t have high expectations, but as I ran 18:07 minutes, came third and got a new PB!

Right now I am tapering for a half Ironman distance on Saturday, Bilbao Triathlon. I will also visit two of my favorite sponsors Orca and Orbea. I know I am not yet in top shape. But who knows, I might have a higher base fitness level that I did a few weeks ago..!