With the toughest conditions I have ever experienced in an Ironman, I knew it would be a rough day. The swim was ok, but nothing to brag about, the bike was mentally harder than expected, even though I was well prepared and knew what was coming. The run was surprisingly good, taking in consideration that the feeling was bad. Lost the first place early in the run, but managed to retake the lead by km 39, and could therefore win my second Ironman.

The race was at about 2000m (6540 feet) elevation,  and there was around 2400m of total climbing, so being there prior the race for acclimatizing and get to know the course was essential.
My coach Jens, my boyfriend Filip and I arrived to our newfound friend Scott’s house Meeks Bay about three weeks prior the race.
The preparations for the race did, however, not go completely as planned. Few days after arriving, I fell when trail running and cracked a rib. That forced me to cancel a lot of swim sessions, and adjust the intensity of the training in general.
As time went by, the rib healed and I started to feel acclimated to the elevation. Few days before the race I felt nothing to the rib, and I could train without noticing the elevation.

The organization had been warning for a chilly race morning, but it was with mixed emotions I watched the snow beginning to fall the day before the race.  Though I hate being cold, the Viking blood in me seems to make my body handle tough conditions, compared to many of my competitors.

Swim:
There was frost on my saddle as I arrived to transition on race morning. It was also frost in the sand, so I was thankful they let us stand in ankle deep water before the start, as the water temperature was around 17-18 degrees C. Pro women started 3 min behind the pro men, and 7 min ahead of AG. Because of the big differences in air and water temperature, a thick fog was created on the surface, which made it hard to navigate. 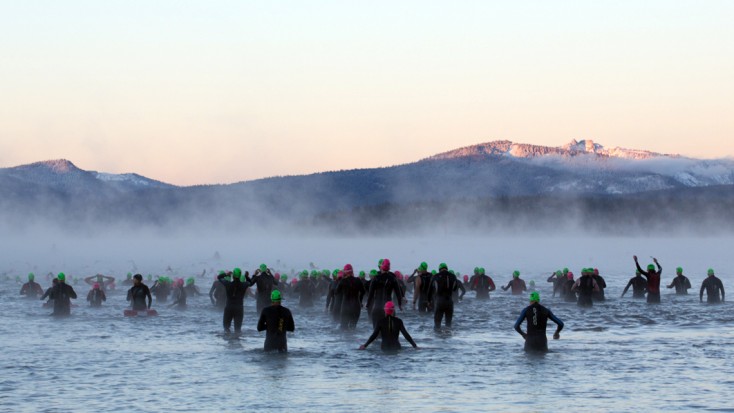 I was in a group of 4-5 girls, and we went in the wrong direction several times, before we spotted the next buoy. Though the water was as clear as in a pool, and not very wavy, it was a slow swim. Only one female, the experienced Dede Griesbauer, swam sub 1 h.

On the second, and last, loop on the course, I lost the group as we were trying to go around a group of age groupers that we had caught.
Official time: 1:01: 27
Place: 7

T1:
I came out of the water about 10 sec after the group, and I tried not to focus on the pain in the feet as I was running in the frosty sand.
The changing tent was filled with female athletes, and everyone was using more time than usually, as we all had to put on layers, and our hands were freezing.
As I ran out of the tent, I realized I had had a faster transition than many others.

Bike:
I was told I was second as I mounted the bike, so I had gained 5 places in transition. Now that was a first.
Freezing hands, feet and legs made it quite hard getting the body moving, and eating a bar within the first hour, which usually is the goal, as out of the question. I could only focus on getting warm. Catriona Morrison was close behind in the beginning, but later I was more or less by myself. I overtook Dede at around km 65. 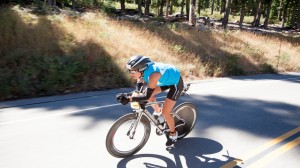 The bike was a two-loop course, where each loop included two big climbs with up to 16% grade, fast decends and “power sections” where you could go in big gear. This big and frequent variation made the course really interesting and fun, but also very hard on your legs.

Already after the first loop, I started to feel the fatigue, and that worried me a bit. I was expecting the other girls to catch me, but I was actually extending my lead to everyone, besides the French girl Jeanne Collonge. The last 30 miles, we were together, as she pulled away uphill, and I pulled away downhill. By the time I reached T2, I was ahead of Jeanne by two minutes.
Official time: 5:34:39
Place: 1

T2:
Besides getting wrong guidance, so I almost ran in to the men changing tent, the second transition went ok.

Run:
The legs felt heavy starting the run, and my only focus was to get the legs moving and finding a rhythm. First time I looked at my watch was when Jeanne passed me by km 7 (mile 5). She was looking really good, but I tried to be patient and focusing on my own pace. From experience, I get relatively stronger than my competitors in the last half of the marathon.

Several girls kept a higher pace behind I did, but it looked as though they were too far behind to be a potential threat. Jeanne kept pulling away, up to 2 min, but after half the run, the time difference between us remained the same.  With 8 km to go, I was only 40 sec behind, and I knew I would never forgive myself if I didn’t try to make a move, even though the body signaled that there was nothing extra to give.

In the bottom of the last descend, before starting the last climb up to Squaw Valley and the finish area (km 39), I had caught her. There were a few stressful seconds when running up the hill, when I was uncertain if she had tried to follow me or not.

The last few km to the finish was the deepest I had ever dug, and even when I heard the crowd in the finish area, I was uncertain I was going to make it. The happiness drowned in the fatigue, and I couldn’t believe I was winning. I finished 51 sec ahead of Jeanne, 19th overall, in a total time of 9:58:53 in the inaguinal Ironman Lake Tahoe. Official run time: 3:16:54. 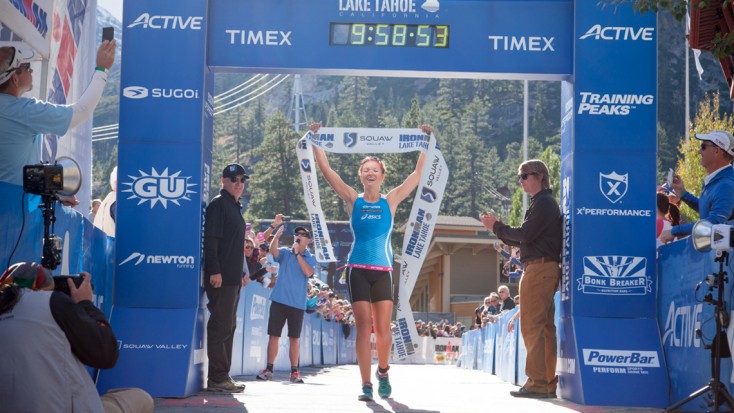 Post-race:
With one of the toughest conditions in Ironman history, with the 2nd highest DNF-rate, everyone who finished Sundays event can call themselves winners. I have huge respect for the hard work of the amazing volunteers, who were out there in the cold, all day, making sure us athletes were hydrated and safe. Thank you so much all volunteers!
I am incredibly thankful for all the support, from sponsors who believed in me also before I won, from strangers along the course cheering me on, from friends and family online. 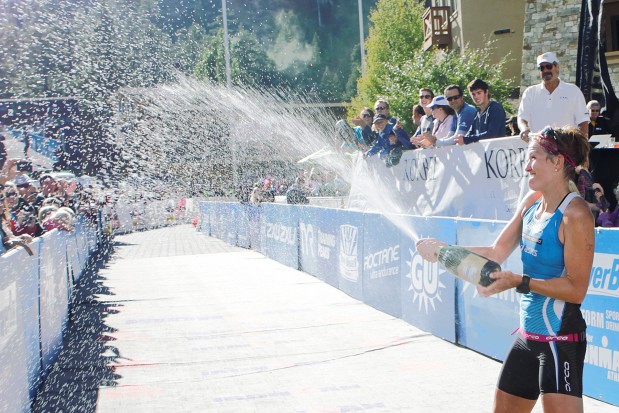 With triathlon focus on hold, I have some time for other activities than triathlon. In Lake Tahoe area there are endless possibilities for outdoor activities. I went MTB on the Flume Trail, and luckily they had a shuttle to get up, so I could only enjoy the ride down. 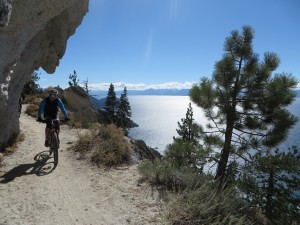 I have met so many nice people, and new friends for life on this trip. The weather has been unusually cold, so it is very unlikely they will have the same conditions net year. It’s an amazing place, and I would recommend everyone to go there.
Special thanks to Scott and Maryam Ebke, Franz Weber and Klaus Grimm. Without you, this trip would not have been the same, or more likely, not even possible. 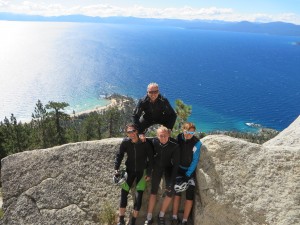